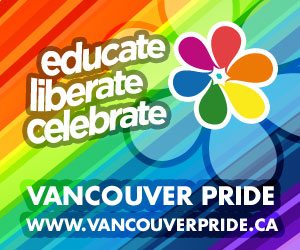 Over the last number of years, Canadians have received many new rights, including gay marriage. The theme, ‘Liberate’, carries the message of unity, diversity and acceptance for the LGBT community. In recent months and years there have been alleged hate crimes against homosexuals in Vancouver and across Canada. The Vancouver Pride Society hopes to bring additional attention to the importance of this year’s theme to help raise awareness.

According to the Vancouver Pride Society there are almost 80 countries where homosexuality is still illegal and punishable by death in seven of those countries. The VPS is committed to supporting human rights and equality for LGTB people around the world. In fact, the Pride Parade Grand Marshall is Nikolai Alekseev, a Russian LGBT activist, lawyer, journalist and founder of Moscow Pride.

This weekend, show your support of LGBT rights and come join over 630,000 people* at Vancouver Pride!

Banff Pride 2020: When a community comes together

Extending your Pride all year long

Don’t take life too seriously. No one makes it o