This article was published on November 15th, 2011 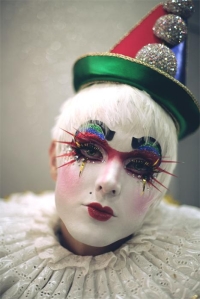 Prince Poppycock as Pagliacci on “America‟s Got Talent,” Photo: www.ShawnSmithPhoto.com

This Saturday night will be Vancouver’s chance to see the performer America’s Got Talent judge Piers Morgan said was “becoming my guilty pleasure”.  During his run on Season Five on America’s Got Talent, Prince Poppycock proved he was America’s guilty pleasure too as the foppish, baroque dandy made it all the way to the final four.
Created by singer-songwriter John Quale initially for a single performance of an aria from Figaro, the Prince Poppycock character has taken on a life of his own.  His over the top outfits, wigs and stage pieces have won over audiences around the world.  Beneath the camp exterior there lies Quale’s solid classically trained voice that provides a solid foundation to base the frocks and frills that made Sharon Osborne call him the “male Lady Gaga”.
This coming weekend Prince Poppycock will entertain Vancouver along with a host of other talents at Five-Sixty – Guilty Pleasures is a new bi-annual fundraiser produced by MN events and benefiting 4 local HIV/AIDS organizations. A Loving Spoonful, YouthCO Aids Society, McLaren Housing Society and Positive Living BC.
Tickets are available Tickets available at Priape, www.MNevents.ca and at each beneficiaries office: 20% of each ticket goes to the beneficiaries.

The One You Never Forget

One thought on “Guilty Pleasures with Prince Poppycock”